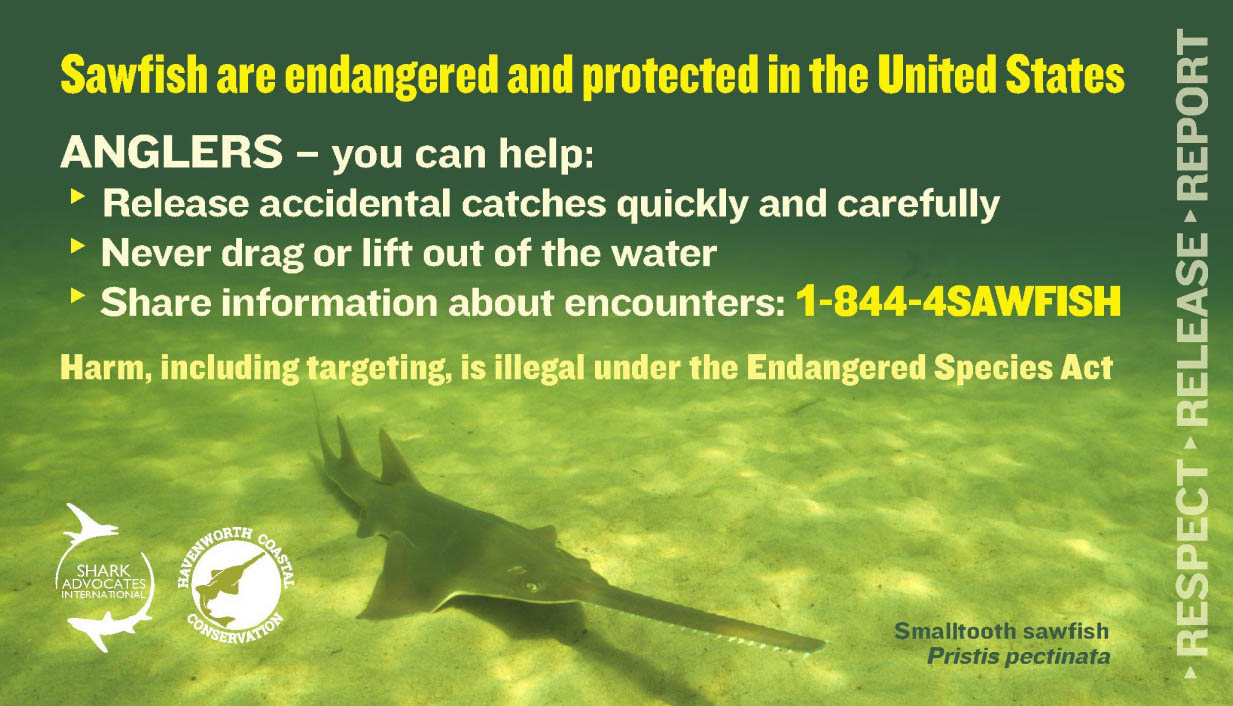 Smalltooth sawfish are listed as endangered under the Endangered Species Act (ESA), which makes it illegal to target, harm, harass, or handle them in any way. While it is technically illegal to catch a sawfish (except with a research permit or in a fishery where incidental take has been authorized), captures do occur while fishing for other species. Any sawfish caught while fishing must be released as quickly as possible. The guidelines below were developed to aid anglers in quickly and safely releasing incidentally caught sawfish; use extreme caution if you do catch one.
The number one rule to remember when handling and releasing a sawfish is to leave it in the water at all times. Do not lift it out of the water onto your boat or a pier, and do not drag it on shore. Because of the ESA protections, it is illegal to possess a sawfish; therefore, removing it from the water is a clear violation of the law. This also ensures the safety of both the sawfish and the angler. Sawfish are powerful animals that can whip their saw very quickly which can cause serious injury to the angler and the sawfish.

If tangled in a cast net:

Sawfish are extremely susceptible to entanglement in recreational fishing lines and commercial nets. Mishandling and the purposeful injury or killing of captured sawfish is both illegal and detrimental to the recovery of the population. Never use a gaff on a sawfish you have caught and never remove the rostrum. Sawfish use their rostrum for detecting and catching food so in addition to being illegal, removal of the rostrum severely limits the animal’s chance to find enough food to survive.

If you catch or see a sawfish take a quick photograph of the sawfish, estimate its size, note your location, and share the details with scientists. The details of your sightings or catches of sawfish help to monitor the population and track the recovery progress. You can share your information by calling 844-4-SAWFISH (844-472-9347) or completing the form.

Your encounter reports will be used to track recovery of the population and steer research efforts, which will ultimately benefit the species and the areas in which you fish.